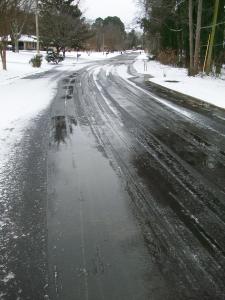 Snow and Ice Melting on my Street, Snellville, Georgia, January 29, 2014

Here we go again.  Here in the South, we are seeing yet another repeat of situations that have occurred in past winters in which there were treacherous icy and snowy conditions outside.  A couple of years ago, there was a snow storm that came through the South, leaving the Atlanta, Georgia area, where I live, shut down for one entire week.  Yesterday and today, we are, again, experiencing icy and snowy conditions that have caused numerous vehicle collisions and stranded 1,000s of motorists.

Obviously, folks have not learned from past experiences, is all I can think of.  When there is two inches of snow that covers wet roads that have turned icy, that is a good enough reason for me to stay put.  I don’t understand why other folks don’t do the same, unnecessarily risking life and limb to challenge Mother Nature, and often, losing in doing so. 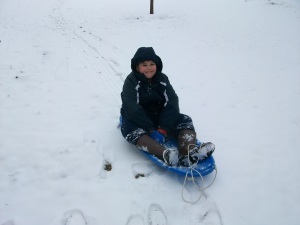 Two years ago, I wrote a letter to the editor of the Atlanta Journal Constitution about this same type of situation.  While my letter was right on topic and publishable, it was declined because there were already other letters on this issue that had been published, as I was informed by a newspaper staff member.  That’s fine, but I would like to make my point, again, that plows with salters and sanders are necessary in Georgia, and in other places throughout the South, for that matter. 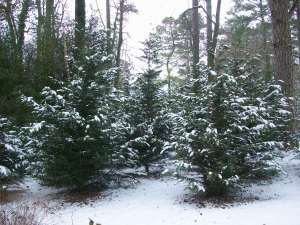 The argument against such plows about which I read in media in the past is solely due to cost.  However, I believe that it is better to be safe than sorry.  To me, it would be worthwhile for state departments of transportation to invest in some plows with salters and sanders, and to plow at least main roads and highways when weather conditions become as treacherous as they are now.

I have heard and read blame directed toward the state transportation authorities for not ensuring these measures.  I have also observed and read in the media in the past that counties and municipalities in Georgia, particularly in and around the Atlanta metro area, have taken it upon themselves to invest in plows and to do plowing in weather conditions in which it is needed.  In light of all considerations and observations of which I am aware, I believe this is a smart move.  In the long run, these measures will have prevented innumerable vehicle accidents from occurring as well as having maintained the safety of those folks who insist on being out on the roads in such treacherous icy and snowy conditions.

Really, the best place to be when experiencing snow and ice in the South is indoors.  Emergency responders and the National Guard are over-extended when situations such as this occur, and people do not simply stay indoors.  Because there is such a lack of investment in snow removal machines and equipment in the South, folks here are forced to wait it out until the snow melts and safer road conditions return, or they can continue to try to challenge these type of conditions, and lose.

In places where there is little to no snow removal equipment used, why insist on challenging treacherous weather conditions?  In dealing with such treacherous icy and snowy weather conditions, it is better to be safe than sorry.    I believe that is the best philosophy in situations such as these.   On the other hand, however, life in the South should not come to a halt due to snow and ice.  People and the economy are placed at risk, and both suffer unnecessarily because of the lack of resources to effectively deal with the effects of winter weather.  Positive and progressive change are necessary in this area.