David I. Briggs, a distant cousin of mine, was a man who I never knew, but whose pain for his loss I felt through the hearts and spirits of his family – his mother, father, and sisters.  David was the only son of Ivan Francis Briggs (1907-2000) and Louise (Gullo) Briggs (1915-1997) of North Collins, New York.  He was 21 when he and most members of his battalion (C Company, 4th Battalion, 9th Infantry Regiment, 25th Infantry Division) were killed in heavy gunfire in Tay Ninh, Vietnam on November 23, 1968 (Small, 2001).

It is my understanding from having read an article in the Hamburg Sun, that David’s battalion invaded an opposing forces’ base camp, but underestimated their strength (Gordon, 2012).  David and his captain were the first to have sacrificed their lives in that invasion (Gordon, 2012).  Thirteen men of the battalion were killed on that November day (Small, 2001).

I met my distant cousins, Ivan, Louise, and one of their twin daughters, in my early to mid-teens while visiting them in North Collins, New York.  Louise was a wonderful cook, and it is said that it is one of the reasons that Ivan married her.

From what I observed, Ivan and Louise also had a love for family.  Anyone who knew them could sense the pain and loss they carried with them due to the death of their son, David.  I remember after having first met Louise and Ivan that I asked my parents about the sense of deep sadness in them that I felt, and discovered that they still grieved the loss of their son, David. 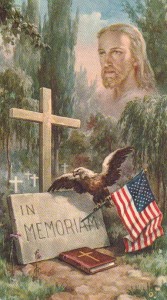 At that time, I was astounded to know that Ivan and Louise still grieved for David after so many years, and realized that he was very much loved by them. I believe they carried that sense of grief and sadness in themselves from the time that David was killed until their own deaths.  When I met them, nearly 20 years had passed, and they were still hurting from his death. Family said that it broke Louise’s heart when David was killed; she was never the same after that.

So, while I never knew David, nor, I believe, any men who have been killed during the course of duty in war, I know that they will always be remembered for their bravery and for giving the ultimate sacrifice of their lives. May we remember and honor all those who have gone before us, who have given their lives to make this world a better place. May God bless you, David, and may you rest in peace.

Happy Mother’s Day to all moms, moms-to-be, grandmothers, great-grandmothers, and anyone who serves in this blessed maternal role!  Please enjoy this photo of a beautiful orange rose that I snapped yesterday in my neighborhood! 🙂