I can’t believe that almost one year has passed since I’ve made my last post on WordPress!

My family and I have been extremely busy this year, and the time has really flown by at an incredible speed – much faster than usual, I’d say.

It has been a great year, however, and my son and I took a couple of days to enjoy the sites in Chattanooga during Thanksgiving vacation.

Another ceiling view inside Ruby Falls Cave. Notice that some of the formations have been broken off in the past. Tourists were told that people did that in the 1930s during the Great Depression to sell them for money. November 26, 2019

Posted here are some pictures I took while inside the Ruby Falls Cave on Lookout Mountain in Chattanooga, Tennessee.

I had never been there before, so I was pleasantly surprised and awed by its beauty. 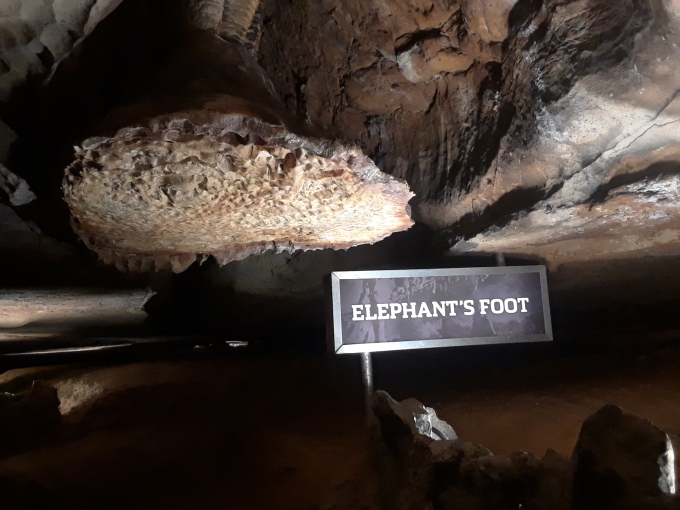 Formation that looks like an elephant’s foot inside Ruby Falls Cave. November 26, 2019

I’ve toured a few caves in the past, but this is one of the best I’ve seen!

A famous formation in Ruby Falls Cave that people are allowed to touch. November 26, 2019

Please enjoy the pictures, although they don’t do it justice. 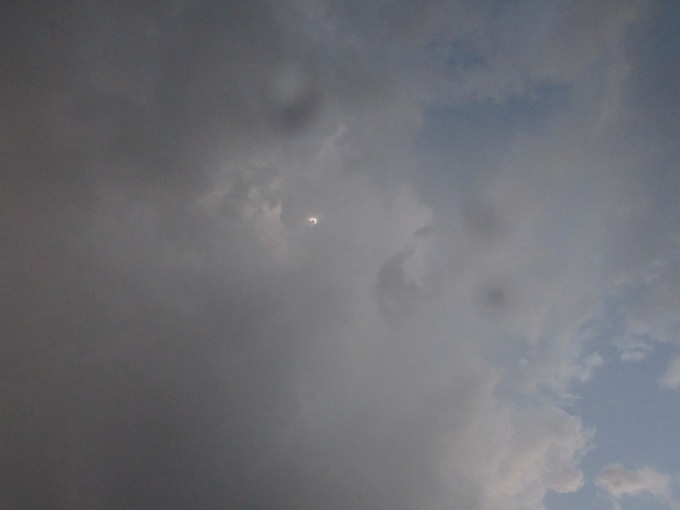 On Monday, August 21, 2017, my son and I traveled to Clayton, Georgia to Boy Scout Camp Rainey Mountain to participate in their special event, held to witness the total solar eclipse!  We met up with other boy scouts from my son’s troop, and enjoyed viewing the eclipse with about 1,000 people who were there for the event.

It was an absolutely wonderful and amazing experience to be in a zone of totality to view the eclipse, even if rain clouds came through during the last 20 minutes before totality.

My son and other boy scouts looking at the eclipse, Camp Rainey Mountain, Clayton, Georgia, August 21, 2017

Thankfully, we did get to see totality for a few seconds when there was a part in the rain clouds, during totality.  The halo around the sun appeared to be lavender in color, through the clouds.  It was really neat! 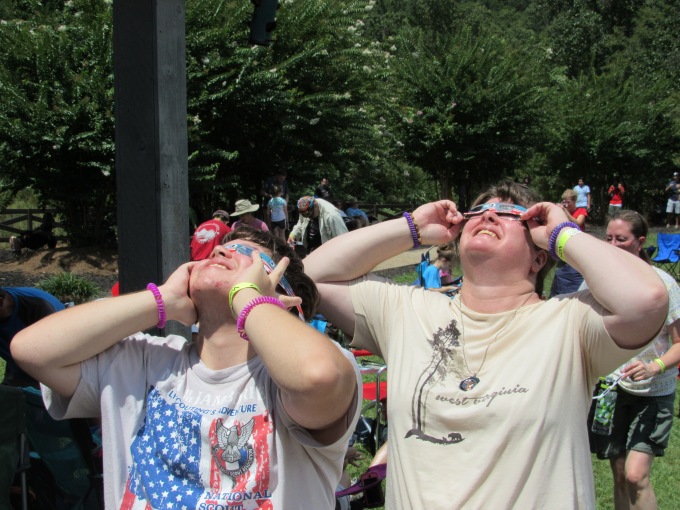 And, when we experienced totality, the sky became really dark, like it was night time.  Of course, the rain clouds had already caused it to become dark, though the total eclipse made it significantly dark.

Though we were on the road, driving, for a total of 8.75 hours, plus stopping to eat dinner for 45 minutes, it was well, well worth it to take the day and see the total solar eclipse!

People in the dark during totality of the solar eclipse, Camp Rainey Mountain, Clayton, Georgia, August 21, 2017

I saw a partial solar eclipse when I was younger, but this was like no eclipse I’ve ever seen before.  Again, it was really amazing to see totality and was well-worth the trip.  I would do it again if I could, and am so happy that we had the opportunity to go and enjoy seeing the solar eclipse in totality! 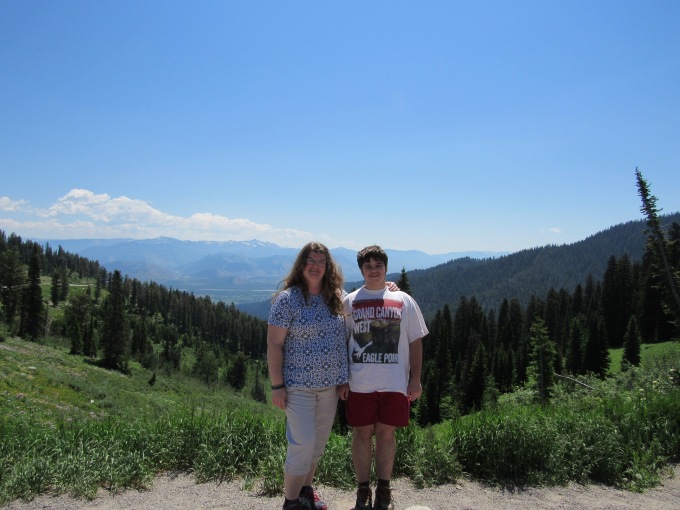 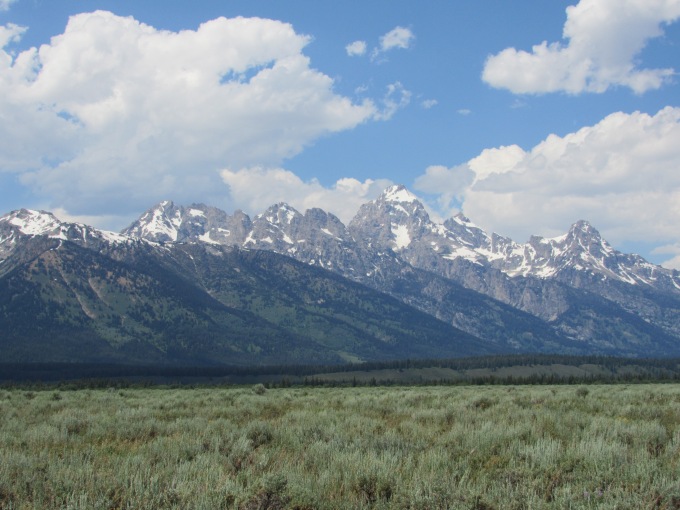 The views at all of these locations were beautiful and stunning!  I wish we could’ve spent more time at Grand Teton – we had such a pleasant, if brief, visit there! 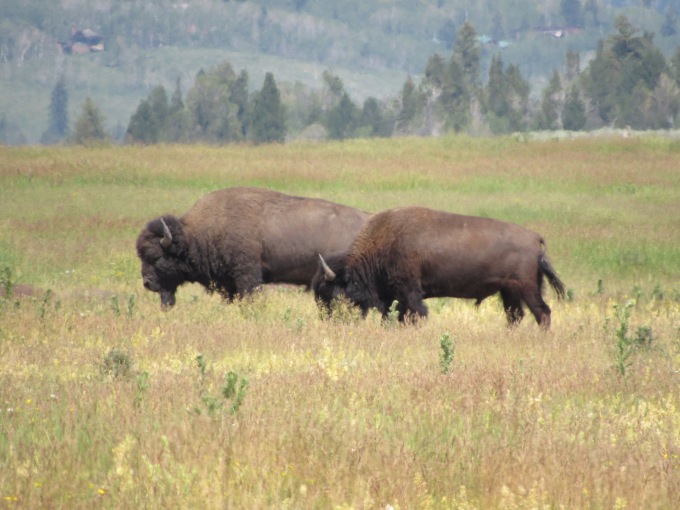 In Jackson, we stopped at the National Park Visitor Center to shop for souvenirs and T-shirts, and found the staff there to be very pleasant and professional.  Bob assisted me with my purchases.

Bob’s professionalism and courtesy was of the quality to make customers such as myself want to come back.  Thank you, Bob, for valuing my visit and my interest in these beautiful national parks! 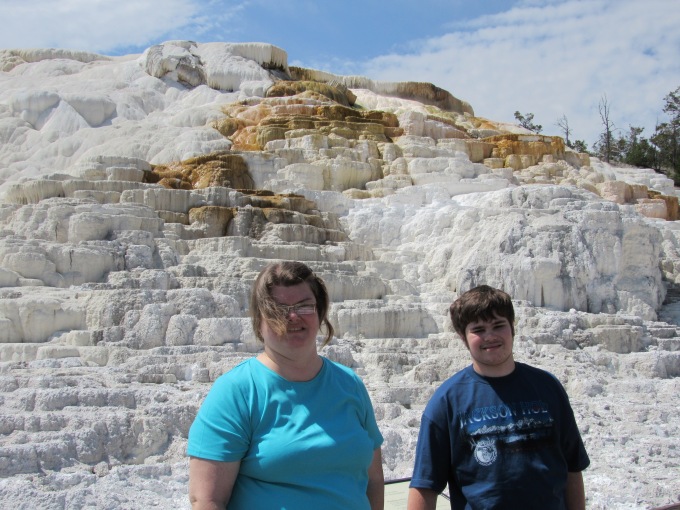 My son and I at Mammoth Hot Springs, Yellowstone National Park, July 9, 2017

My son and I visited Yellowstone National Park and Grand Teton National Park in the past week.  We enjoyed seeing beautiful scenery, picturesque views, and wildlife in only a few days of visiting both of these parks. 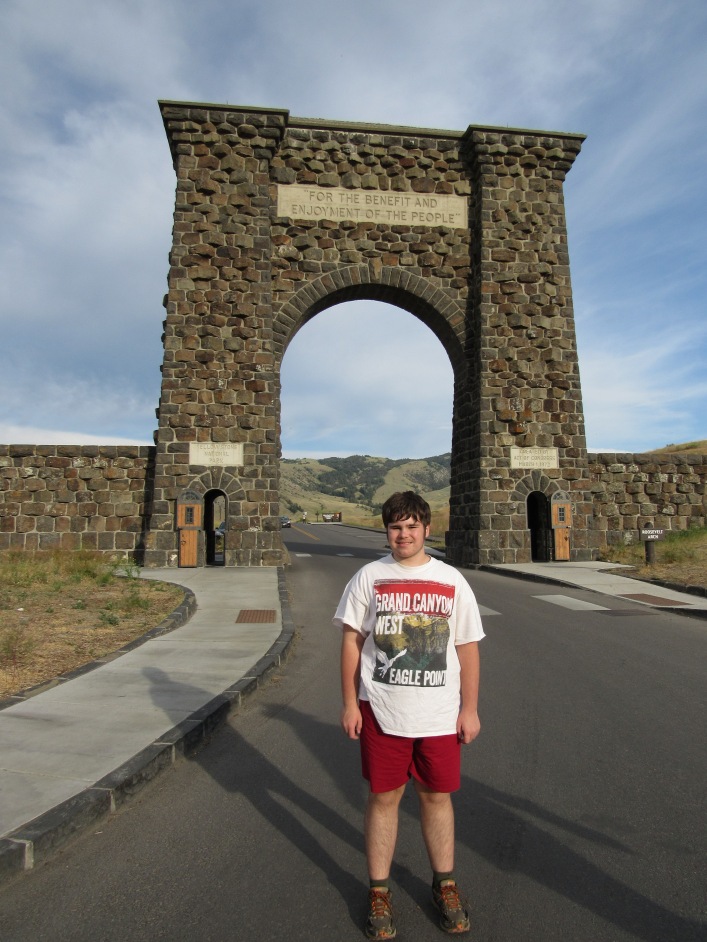 Yellowstone is a huge park, with primary points of interest scattered around it.  That caused much driving and time on the road to see places such as Mammoth Hot Springs; Steamboat Geyser at the Norris Geyser Area; the Roosevelt Arch; Yellowstone Lake; Grand Prismatic Spring; Mud Volcanoes; and of course, Old Faithful.  We enjoyed seeing bison, elk, cranes, deer, and other wildlife. 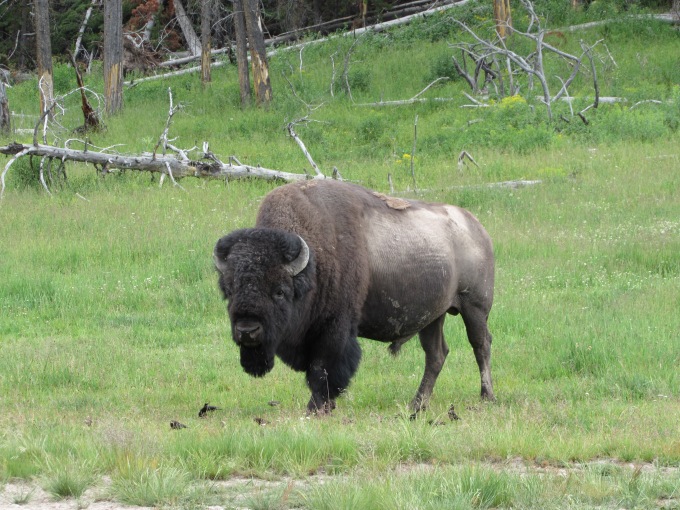 We drove to Yellowstone through Grand Teton National Park, and enjoyed amazing mountain views, beautiful lakes, and pretty wildflowers.  We saw a herd of bison some miles outside of Grand Teton National Park, between Jackson, Wyoming.  And, Teton Gap, driving down into Jackson was pretty amazing, too!  What a view, and such pleasant weather and temperatures we enjoyed! 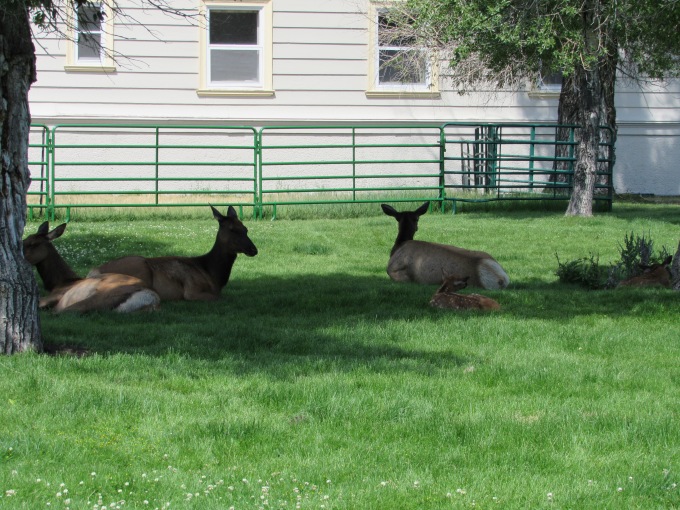 Besides all of the driving, and delays from road construction in Yellowstone, the most unpleasant thing we experienced, overall, were interactions with park rangers.  One of the first encounters with a Yellowstone park ranger was outside the Albright Visitor Center at Mammoth Hot Springs.  He was a self-appointed Elk Police Officer who was totally over the top in accosting, stalking, and harassing my son and I while observing and photographing elk near the visitor center.

On July 9, my son and I were at least 50 feet away from several elk and their young that were laying on the ground, yet the park ranger accosted us from his position across the street, telling us to stay away from the elk! At 50 feet away, he yelled at us to stay away from the elk, and then, he stalked and continued to harass us about it as I called to him that we were going to our car.  He actually crossed the street, harassed us, and followed us to our car.  He only left us alone once we got in our car.  I told the guy to get lost, and he replied the same to me!  Wow, what was his problem!?  He was definitely extremely unprofessional, and a pathetic example of the park rangers employed at Yellowstone.

That was the worst experience we had at Yellowstone, and one to cause me not to want to return.  We definitely don’t need to be treated in such a horrible manner!  There were also two other instances of park rangers at Yellowstone being less than professional.  One accosted us from afar, again, at Old Faithful.  We reached down to touch water on the boardwalk, and the guy told us we committed a “federal crime.” Really?  We were on the boardwalk, and he was trying to tell us we weren’t.  Was he blind?

Chalk that up to another sexist male park ranger who has issues with women – or at least single women.  Neither of the those rangers treated men in the same manner.  On the boardwalk, a man reached down and touched water, and nothing was said to him.  And, at Albright with the elk, there were two other instances of men my son and I observed who were no more than 10 feet away from the elk, taking pictures, but the Elk Cop didn’t harass or stalk them, or make them feel threatened by chasing them into their cars.

Yet another park ranger refused to allow me to use a restroom in a campground.  I had to drive to another location 12 miles away to use the restroom for goodness sakes!  There were at least as many negative as positive interactions we had with park rangers at Yellowstone.  We did have good experiences hearing rangers give talks at Steamboat Geyser and the Norris Educational Center.  Thank you, Rangers Diana and Laurie, for those educational and interesting ranger talks. Your professionalism helped make our visit a little more enjoyable. My son also earned a junior ranger patch by completing the associated book; thank you to Ranger Jim for making that a positive experience for him.

That stated, my son and I enjoyed a fun time at Yellowstone, overall.  Visiting Jackson, Wyoming, and seeing the Teton Mountains was lovely, too.  It would have been nicer, however, to photograph a few elk without being unnecessarily and unprofessionally harassed by a park ranger, especially after traveling across the country and spending $1,000s to visit Yellowstone.  While Yellowstone is not my favorite park of all of the national parks I’ve visited, it was nice to see and good to have as protected land, even though some of the park rangers need to work on their people skills!

On Labor Day weekend, my son and I visited the 9/11 Memorial in New York City.  To follow are a few pictures from our visit in remembrance of 9/11, and the victims and survivors of that day. 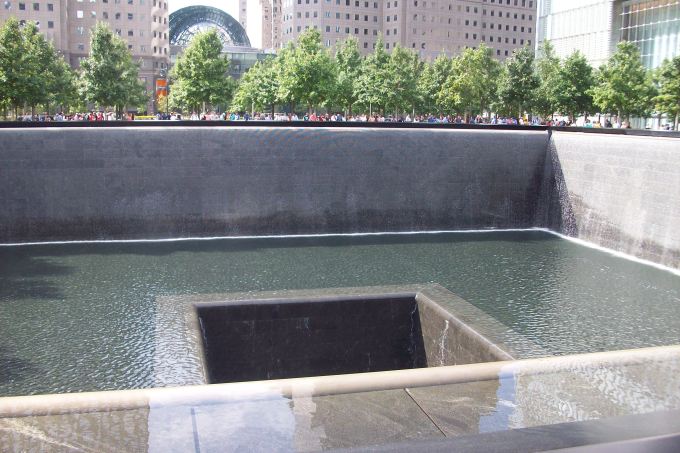 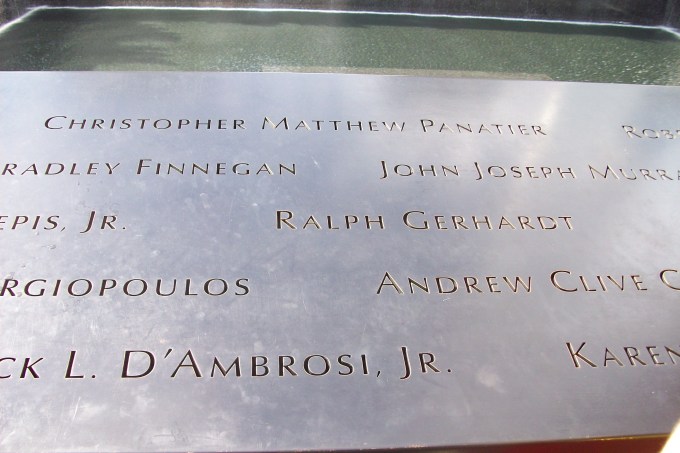 My son Standing next to the New Transportation Hub (Built Similarly to the Shape of a Dove) and the New One World Tower, New York City, September 3, 2016

Unfortunately, the lines were so long to enter the actual museum, that we did not wait to go into it.  People were saying that record crowds were at the memorial on the day we were there.  We would have had to wait 1-1.5 hours to get into the museum.  At least we were able to see and take in the outdoor memorial area.

My son standing next to a Giant Sequoia in Sequoia National Park near Three Rivers, California, July 2016

Last week, my son and I were in California.  It was the first trip there for both of us, and was wonderful and memorable!  All my life, I’ve wanted to see the giant trees, and finally took that opportunity this summer.

Of everything, we enjoyed seeing the Sequoias most of all, and wish we could have stayed longer!

My son (as a werewolf) and I with Snoopy, Charlie Brown, and Lucy at Great Smoky Mountains Railroad Pumpkin Patch, Whittier, North Carolina, October 2015

This month, my son and I had fun at the Great Smoky Mountains Railroad Pumpkin Patch.  Each year, the railroad has the Charlie Brown Pumpkin Patch, and we have attended it many times. 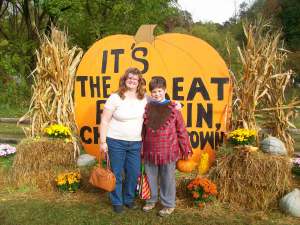 This will probably be my son’s last year going to the pumpkin patch.  This is a great family event, and we have had a wonderful experience throughout the years! 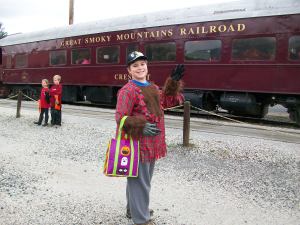 blogbymichele
Create a free website or blog at WordPress.com.