The families of Gale, Henn, Cole, McGee, and Bulson are a big part of my family ancestry on my dad’s mother’s mom’s side of the family.  The Gale’s came to the United States from England.  William M. Gale, who is my Great Great Grandfather or Great Great Great Grandfather, was born in England.  Emily Esther (Costard) Gale (born on Isle of Jersey in the Channel Island, England on January 29, 1849-died in North Collins, New York on July 11, 1917), is possibly the mother (more likely) or a sister of William H. Gale, though I am unsure if he was William Hamilton Gale or William Henry Gale.  There were also other Gale’s in the family, including Walter Allen Gale, Harry Hamilton Gale, Julia Emily Gale, Alice Costard Gale, Lydia Ada Gale, and Carrie Camilla Gale.  Either William Hamilton Gale or William Henry Gale married Anna (Henn) Gale, and they had a daughter, Emily B. Gale.  Harry Hamilton Gale (September 14, 1878-March 1930), an uncle of my grandmother, served in the military in New York State.

All of the Gale’s lived in Hamburg, New York, but for Harry who is later said to have moved to Canada.  William (Emily B. Gale’s father) was a successful barber, and owned and operated his own barber shop in Hamburg for decades.  They lived on Main Street, and the barber shop was close by their residence.  Julia Emily (Gale) Briggs was married to Clarence Briggs, and they had a daughter, Bernice Gale Briggs Babcock Sprague, my grandmother – my father’s mother.

My Great Great Grandmother Emily (Costard) Gale’s sisters remained in England, but stayed in touch with her and sent photos and letters to her through the years.  Irish ancestry, through marriage, came from one of my great great grandmother’s sisters, Julia McGee; her son was named William McGee.  He married and had two daughters, Dorothy and Phyllis. Dorothy married Mr. B. Apps on August 2, 1937.

There were also several members of the Henn Family, who had immigrated to the United States from Germany.  From what I have uncovered, I believe that Frank Henn married Anna (Goetz) Henn.  They had children, including Fred and Louis, and possibly Anna, Frank, William, and Charles.  Fred (Frederick) (born October 20, 1843 in Bavaria, Germany) was a soldier in the Union Army and fought in the Civil War in Louisiana and Virginia.  He was a private in Company D, 116th NYVI Regiment of Buffalo.  He was wounded in Louisiana, and spent 2-3 months in the hospital, there, recovering.  He was honorably discharged due to the end of the war.  There is a photo and record of his service on file at the Hamburg (New York) Historical Society.  I also have a photo and an item of memorabilia reflecting his service in the Army.  He was married to Mary A. Henn, who died in 1896.

When Emily B. Gale died in 1986 and her estate was sold, my family missed acquiring Fred Henn’s medal from his service in the Civil War because it was grabbed quickly by an antique dealer who had a special interest in such memorabilia, and who had arrived just ahead of my parents for the sale.  It would have been a wonderful piece to keep in the family.  Additionally, I have a beautiful and colorful marriage certificate of a Friedrich  Henn and Mahole (Thompson) Henn, reflecting their wedding date as July 27, 1897 in Germany.  This is believed to be a different Fred Henn than the man who fought in the American Civil War.  Also remember that Emily B. Gale was the only child of William H. Gale and Anna (Henn) Gale.

The Cole’s are part of my family ancestry through Carrie Camilla Gale’s marriage to Frank Cole.  Carrie was the eldest daughter of William and Emily (Costard) Gale.  Frank and Carrie had a son, Arnold, who married Grace Cochran.  They then had three sons and a daughter, including Arnold Cole, Jr., William E. Cole, Eugene Cole, and Norma G. Cole.  I have several photos of Arnold Cole as a baby and as a private school student in Buffalo, New York.

I have one image William M. Gale, and a few photos of Emily (Costard) Gale.  I do not have any photos of Frank Cole, though I do have a couple of photos that include Carrie with her sisters, Julia and Alice.  Julia was my Great Grandmother – my Grandmother’s mom. Emily B. Gale, my grandmother’s cousin, lived with her parents, and never married.  She inherited the family home following the death of Anna (as William had predeceased her), though was placed in a nursing home in Hamburg, New York, where she died in 1986.  Emily B. Gale owned many amazing antiques and treasures, including antique furniture; dolls; photographs in frames; and Civil War memorabilia of Fred Henn.  My family was able to purchase a few of those items at her estate sale just after her death.

William H., Anna (Henn), and Emily B. Gale, and Frederick and Mary A. Henn, are buried in Prospect Lawn Cemetery in Hamburg, New York. 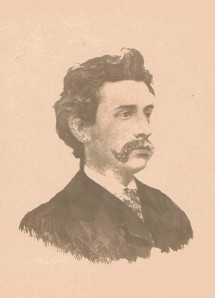 This is an image of William M. Gale, the father of William H. Gale.  The image is printed on a postcard, and would have to be from the early half of the 1800s.

Here is Emily Gale with Julia Gale, in Hamburg, New York in about 1890.

This photo is thought to possibly be that of a Gale boy. 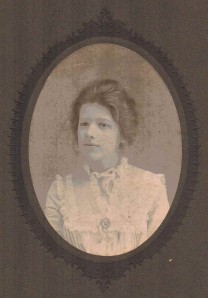 This is a photo of Alice Gale, who was one of William Gale’s sisters or nieces.

In her later years, Emily (Costard) Gale also worked at Condenseo Mince Meat in or around Hamburg, New York.  This is the best photo that I have of the employees of this company, a photo that also includes my Great Grandfather, Clarence Briggs, and one of his brothers, Howard Briggs, who both also worked there at that time.  Emily is seated in the middle, front row of the photo, while the Briggs men are standing at the rear. 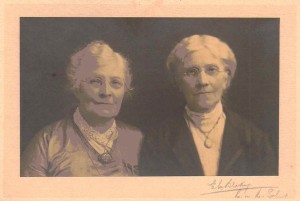 This is a picture of Emily (Costard) Gale’s sisters, Julia McGee and Martha Bulson, from 1929 in England. 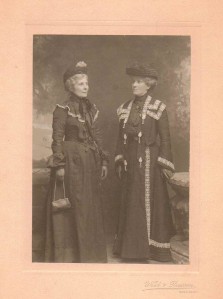 Here is Martha Bulson an her sister, Julia McGee, in England in 1923.  They were sisters of Emily (Costard) Gale.

Here is Julia McGee at Christmas in England in 1923.  The flowerettes were painted on the photo by William McGee, who painted pictures.  I believe the William was either her husband or son.

Here is Martha E. Bulson with her sons and grandchildren at her ‘Manor House’ in Lee-on-the-Solent, Hampshire, England, on November 27, 1932.

Again, here is a photo of Martha E. Bulson with her sons and grandchildren at her Manor House in Lee-on-the-Solent, Hampshire, England, on November 27, 1932.

This is a photo of William McGee in England in 1933. 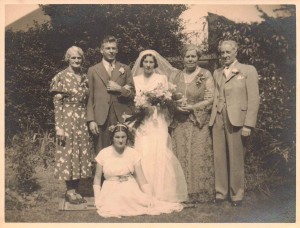 Here is William McGee (right) with his family.  William’s wife is at the far left.  The McGee’s daugther, Dorothy married Mr. B. Apps on August 2, 1937.  The woman standing next to William is the groom’s mother.  The McGee’s daughter, Phyllis, is sitting.

This photo is of Ronald Bulson in England.  Ronald was Martha Bulson’s grandson.

This is a photo of my Great Grandmother, Julia Emily (Gale) Briggs as a girl.

Here are the Gale girls of Hamburg,  New York around 1890. 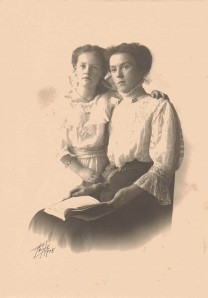 This photo is possibly of Alice Gale and a daughter, although I am not sure.  It is from 1908.

This is a photo of Anna (Henn) Gale with my Great Grandmother, Julia Gale, and Anna’s only child, Emily B. Gale, in Hamburg, New York around 1900.

Anna (Henn) Gale is shown in this photo, in Hamburg, New York around 1910. 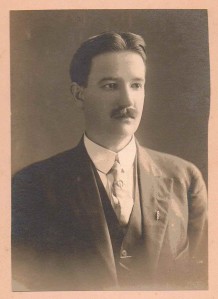 Pictured is William H. Gale, husband of Anna (Henn) Gale, and father of Emily B. Gale, of Hamburg, New York around 1890-1900.  He was a barber in Hamburg for decades.

This is a photo of my grandmother’s cousin, Emily B. Gale, as a young girl, wearing a fur coat in Hamburg, New York around 1900. 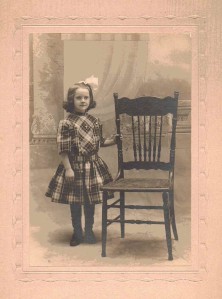 This is another photo of Emily B. Gale as a young girl in Hamburg, New York around 1905.

Again, pictured is Emily B. Gale of Hamburg, New York around 1910.

Here, William Gale is pictured as an elderly man.  He was 91 years old in 1938 when this photo was taken, just outside the Gale Family home in Hamburg, New York.

This is a photo of Harry H. Gale, a brother of William H. Gale.

This is a photo of Harry Hamilton Gale as a Union Army soldier out of Buffalo, New York in the 1880s. 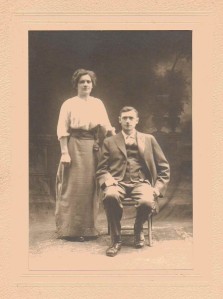 This is a photo of Frederick Henn and his wife, thought to be named Anna, in Hamburg, New York around 1890-1900.  Notice that Fred is wearing his medal for service in the Union Army during the American Civil War. 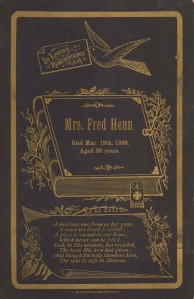 This is a funeral card for Mrs. Fred Henn, whom I believe would have been the lady in the photo preceding this image.  She died on March 19, 1896 in Hamburg, New York at age 58. 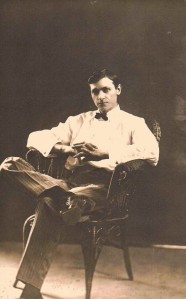 This copy of a photo is of Fred Henn, also identifying his regiment in the Army in which he fought in the Civil War.  I obtained copies of these items from the Hamburg Historical Society in Hamburg, New York in 2001.

This is a photo on display at the Hamburg Historical Museum/Society.  I took a photo of the picture when I visited there.  My grandmother’s cousin’s uncle is Fred Henn, who served in the Grand Army of the Republic’s Company D of the 116th Regiment during the Civil War. 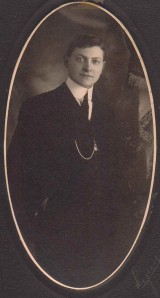 This is a photo of Louis Henn, a brother of Fred Henn, in Hamburg, New York around 1890.

Unknown Ancestor, Possibly from the Henn Family, Troy, New York, Circa 1925-1935 or Earlier

This is a photo of a man believed to be a member of the Henn Family. 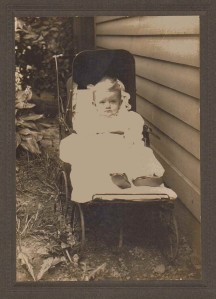 This is a photo of Arnold Cole, the son of Frank and Carrie (Gale) Cole, in Buffalo, New York in 1892. 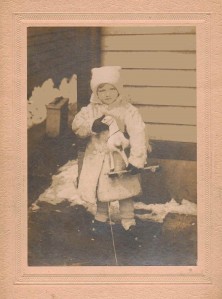 Here is another picture of Arnold Cole, with his toy horse, probably in Buffalo, New York around 1895.

Here is another picture of Arnold Cole as a boy. 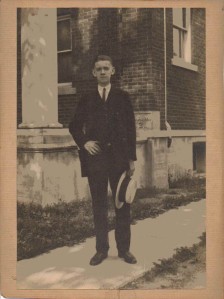 This photo of Arnold Cole was taken in 1908 in Buffalo, New York when he was 16-years-old.  It was taken outside of a private school that he attended in Buffalo. 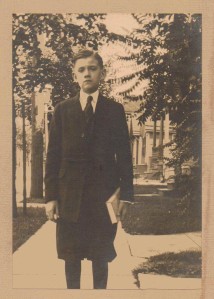 Here is another photo of Arnold Cole at age 13, outside of another private school that he attended in Buffalo, New York, in 1905. 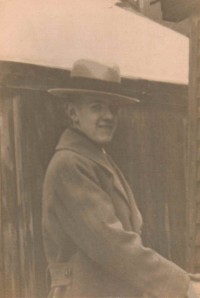 This is another photo that shows Arnold Cole in Buffalo, New York as a young man in 1909.

These represent some of the many photos that I have of these of my family ancestors.  My grandmother, Bernice, had loads of vintage and antique photos that she kept for many years until she decided to burn most of them in a burn barrel used for burning trash in the back yard of her home.  One day, when I was a girl, when I was visiting her and there was “trash” burning in the barrel, I asked what she was burning, and she told me.  I remember getting very angry and upset, and stated to her that I wanted the photos, and not to burn any anymore.  I could not believe that she would burn such valuable memories related to her family heritage!

Therefore, I have many photos of my family ancestors, but would have had many more had my grandmother not put them up in smoke.  Additionally, I used to have many more tin types, especially those of the Henn’s, however when my family moved from Collins to Gowanda, New York around 1992, they were unknowingly discarded by my parents.  I was heartbroken that such valuable family treasures had been thrown away.

This photo reflects the 15 tin types of my Gale, Briggs, and Henn ancestry that were accidentally discarded by my parents during my family’s move from Collins to Gowanda around 1992.

Again, as in previous posts of photos of my ancestors, the dates included represent the best possible accurate dates and/or estimates of dates of the images.