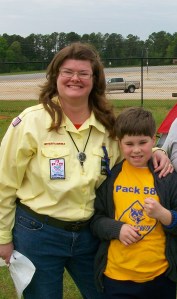 For the past three years, my family has enjoyed attending and/or participating in the Scoutblast Scout Show at the Gwinnett County Fairgrounds in Lawrenceville, Georgia.  This year, the Scout Show was held during this past weekend, April 26-28, 2013.  My son attended this year’s event as a lone scout with me as his leader. 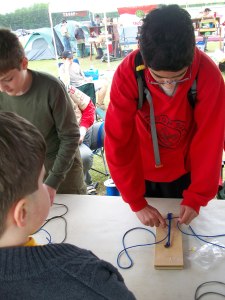 This year, my son had opportunities to observe and/or participate in activities that he had not done previously.  For one, he had the pleasure of having a double helix bracelet be made for him by another local scout whom he knows, and who is an excellent role model. 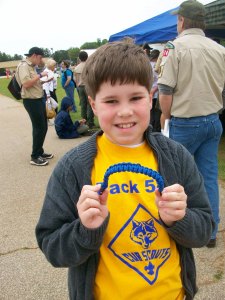 The Boy Scouts from the Lilburn group who created the double helix bracelets truly had their work cut out for them as the bracelets were extremely popular with everyone, from children to adults.

Additionally, for nearly one hour, my son participated in the chess activity for Cub Scouts and Boy Scouts.  Cub Scouts had the opportunity to earn a chess belt loop.  My son has completed enough requirements to earn both a belt loop and pin.

Interestingly, the much older Boy Scout who played my son told his friend, prior to the match, that it would be easy to beat my son, as I overheard him say.  Indeed, the match was very challenging.  Further, even though a troop leader approached the boys’ match and coached the Boy Scout in his troop, my son defeated his opponent.  It was a great feeling of accomplishment for my son.

There were also many other fun and interesting activities at Scoutblast for the boys to do, including weekend camping, blasting small objects from a makeshift plastic pipe cannon, shooting off small rockets, observing and enjoying model train sets, and earning other belt loops, such as in marbles, geology, and other areas.

For the two years prior to this, my son participated in the District’s Pinewood Derby Championships, representing his pack.  This year, he did not have the opportunity to do so, however, he still enjoyed a wonderful time at the Annual Scoutblast Scout Show!