What a beautiful day it was, today, for dozens of scouts around the Atlanta-area to be recognized and receive the religious awards that they earned in 2015.  The Archdiocese of Atlanta Catholic Committee on Scouting, Archbishop Wilton Gregory, and many others were in attendance today, celebrating the accomplishments of area Boy Scouts, Girl Scouts, Venturers, and American Heritage Girls for their accomplishments in broadening their understanding of their faith by having completed different types of scouting-related Catholic religious emblems programs.

A mass and celebratory reception were held at St. Monica’s Church in Duluth today to recognize the scouts, with Archbishop Gregory giving an inspiring homily about the Prodigal Son.  Gregory stated that all fathers should be like the one who forgave the Prodigal Son, welcoming back into the family after being lost and then found again.

As co-coordinator of my son’s religious program for his troop, I am very proud to celebrate with him in earning the Ad Altare Dei religious award in scouting.  This is the third religious award he has earned, thus far, as a scout.  He has previously earned the Light of Christ medal and Parvuli Dei award.

My son invested 30 hours into the Ad Altare Dei scouting religious program.  Included in the program was religious instruction and study, religious community service, attendance at sacramental events such as weddings, participating in a retreat or religious day of reflection, attending masses and confessions, interviewing a priest or other religious, and receiving communion. 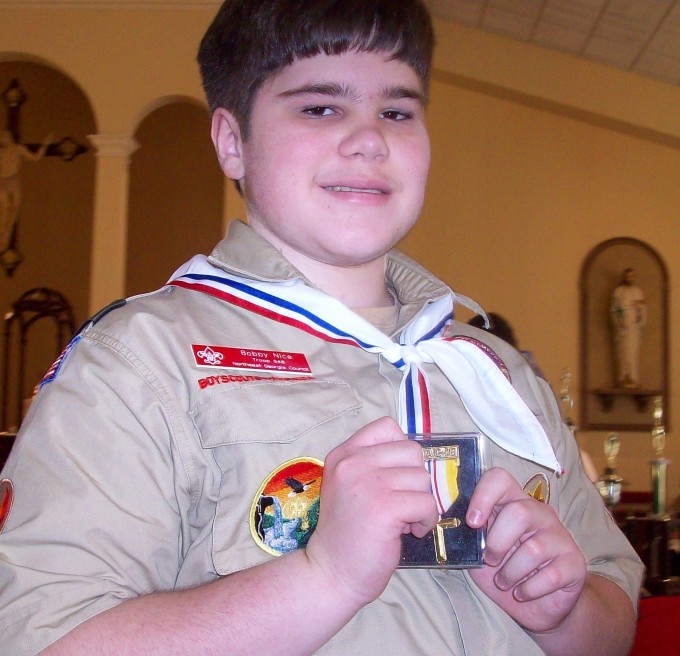 All of the scouts receiving Catholic religious awards, today, worked very hard and invested much time and effort into their accomplishments.  It was wonderful to be there in support of these wonderful endeavors that serve to strengthen faith and spirituality in our youth.

In one of my earlier posts, I included a few photos of several of my ancestors on the Babcock side of my family.  In this post, I have included school photos that reflect Jonathan Babcock (my great grandfather); Charles A. Babcock (my grandfather) and his sister, Louise (Babcock) Heppel; and Bruce Babcock (my father).  These are antique and/or vintage school photos from the Western New York State communities of Collins, and Villenova or South Dayton, New York that are near Buffalo.

This photo reflects the school class of my Great Grandfather Jonathan M. Babcock, probably in Villenova or South Dayton, New York from around 1890.  Jonathan is the boy whose head is circled in the picture.  The teacher is Miss Barnes, and some of the students include: Winnie Hale; Gertrude Williams; Myrtle Pease; Gertrude Hollister; Atta Pease; Ethel English; Ortie Beach; Tom Simpson; John Rugg; Vern Peterman or Peterson?; Ray Pormer?; R. Hollister; and Jonathan Babcock.  There are no other names recorded on the back of the photo.

This is another school photo, likely in Collins, New York, that includes my grandfather, Charles A. Babcock.  He is standing, the third from the right, the boy wearing the tie.  This photo was taken in 1922.  Names of the other children in the photo, in no particular order, include: Warren Fritz; Annabelle Bartow; Harry Kerr; Martha Demerale; Joseph Birtch; Virginia Zilmer; Mary Weber; Lester Andres; Bill _?; Walter Willet; Dorabelle? Bartow; F. Smith; Les Wittman; and Eslie? Fritz.

This is a picture of Collins, New York School District No. 3 from 1922-1923 in what is now known as the L.K. Painter (Community) Center.  This building served as the public school in Collins, New York for decades.  In this photo is my Grandfather Charles A. Babcock.  He is standing in the second to last row, near the left, the sixth boy inside from the left, and is wearing the neckerchief.  His sister, Louise, is also pictured, but I’m not sure where she is located in the photo.

In this photo, pictured are the kindergarten and first grade classes of the Collins, New York School in 1949-1950.  My dad, Bruce Babcock, is seated, in the third row from the front, and is the boy wearing the neckerchief and standing next to the teacher.  I can also identify Robin (Johengen) Mentley in the photo – she is seated in the front row, the second girl from the right.  I am familiar with her because her daughter, Heather, went to school with me in Gowanda, New York.  Unfortunately, no one identified any of the people pictured in this photo – I know of only those two individuals.  Additionally, the teacher might be Ms. Schuele, but I’m not sure.  She was one of my nursery school teachers when I was four-years-old.

This summarizes the school photos that I have of several of my ancestors and extended family members, going back three generations to my great grandfather.

My grandfather, Charles A. Babcock, from Collins, New York, was an athlete and played several sports when he was a teen and into his early 20s.  He enjoyed playing football and baseball, as well as softball and bowling.  He was born in 1911, and had two sisters, Louise (Babcock) Heppel and Eunice (Babcock) McEwen Hembury.

The Babcock children were born to Jonathan M. Babcock and Bertha B. (Gould) Babcock.  Jonathan was from Collins, New York, and Bertha was from the heavily German-American South Dayton, New York.  Eunice moved to Pennsylvania upon marrying her first husband, and they had children.  After her first husband died, she married her second husband, remaining in Pennsylvania.  Louise was the middle child in the Babcock Family.  She married George Heppel, and they did not have any children.

I have included some photos in this post that reflect Charles as a member of football and baseball teams; and I have included pictures of Charles and his sisters, Eunice and Louise, as well as a photo of Jonathan and Bertha upon their wedding. 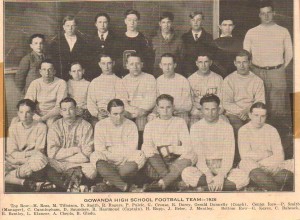 The 1932 Collins Baseball Team is pictured here, with my grandfather, again, seated in the front row, the second from the left.  The men in the photo, in addition to my grandfather, and in no particular sequence, include Clifton Cunningham, Ashley Richards, Charley Daniels, David Eschler, Harold Schrader, Donald Tarbox, Ginger Stevens, Walter Farnsworth, William Edwards, and Stewart Pingrey.

The Collins Center Baseball Team from 1934 is pictured in this photo, with my grandfather standing, the second from the right.  In no particular order, the other men shown in the picture are Bret Ayaw, Andy Sykies, Rusty Hohl, Lavern Buckley, Donald Tarbox, Jim Galloway, Carl Betteker, Murray Potter, Charles Ayaw, Clifton Cunningham, Burton Staffin, Bud Hewitt, and Bill Ball. 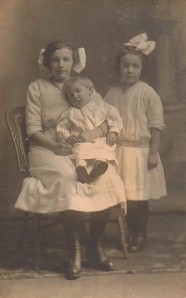 Pictured are my grandfather, Charles A. Babcock, with his sisters, Eunice and Louise, in 1913.  Eunice is the eldest child in the photo.  My grandfather would have been about 2 years old in this picture.

My great-grandfather, Jonathan A. Babcock, worked as a railroad foreman and he was the Town of Collins Constable.  So, it was only natural that my grandfather, Charles A. Babcock, would be pictured at the Collins, New York Railroad Depot.  It was said that he was always a big boy, and he is pictured here in 1914 at 3 years old. 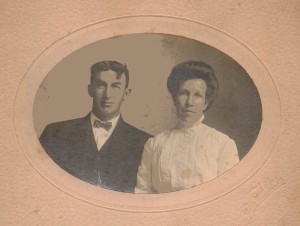 Here are my great grandparents on my dad’s side, Jonathan M. Babcock and Bertha B. (Gould) Babcock.  This, I believe, is their wedding picture, and was taken about 1900.  I got my height from my great grandfather who was 6’4.”