Nearly all of my vintage and antique family photos are from my dad’s side of the family.  Because my mother’s family were immigrants from Poland to Germany to the United States through Ellis Island around 1950, I have fewer than a hand full of vintage photos from my mom’s side of the family, the Krakowiak side, though I do have a few.  Photos and tin types from my dad’s side of the family include those from the following families: Babcock, Briggs, Gould, Hoyler, Staffin, Gale, McEwen, Crawford, Cole, Ritter, Henn, and Goetz.  And, those are just the images, while there are other families who are part of my ancestry, including Rump, Rodgers, and others.

My direct ancestral heritage – in addition to that of Poland from the Krakowiak family – reflects people from England, particularly the families of Gale, Bulson, and McGee; the French and German ancestry of Adelia Staffin; and the German ancestry gained from the families of Gould, Rump, and Henn; and both Hoyler and Ritter (through marriage).   The Briggs’ and Babcock’s were also from England, but had been settled in the United States prior to the Gale’s.  My ancestry can also be traced back to England’s King Henry VIII, as a result of his many marriages; and Clement Briggs, one of my ancestors, who traveled to Plymouth, Massachusetts from England in 1621 on the Mayflower.  The name “Briggs” has many variations; and is believed to have been derived from Saxon William atte Brigge of County Norfolk, England in the 1200s.  That is the furthest back in time that I have been able to trace some of my ancestry.

The following photos and tin types are those that I have selected to reflect some of the many images of my ancestral heritage from the Briggs, Staffin, and Gale families, as I know it, so that the richness of culture, values, and family can be shared and enjoyed outside of my family, as well.  The photos were taken in North Collins and Collins, New York, near Buffalo.  I will make additional posts with pictures reflecting the other families identified in the near future.  Note that for photos that have estimated dates, I have tried to date them as best as possible to reflect an accurate time of when they were taken. 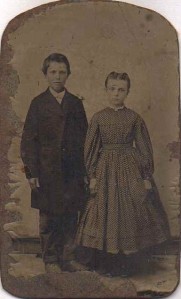 This is the oldest tin type that I have that reflects ancestors of my family.  The tin type was in the condition seen in the photo when I got it from my grandmother, Bernice Gale Briggs Babcock Sprague, so I have carefully preserved it as best as I can.

Adelia was said to have been a short, but fiery and tough woman.  It is possible that she was married through an arranged marriage to my great great grandfather, Wallace Briggs, because they married when they were kids.  It does not even appear that Adelia is 13 years old in the first picture in this post, however it is believed that she and Wallace were married at about that age.  Adelia and Wallace had five boys (Clarence, Howard, Harold, Sumner, and John); and while I am unsure about how Adelia died, it is possible that she died in childbirth.  She would have been 26 when Clarence was born (the second oldest son) and 37 when John was born.  The oldest boy was Sumner, born in 1879 when Adelia would have been 23.

Adelia (Staffin) Briggs was the daughter of John Staffin and Phoebe (Wilcox) Staffin; and she was the sister of Mary Ann (Staffin) Smith (who married John Smith) and William Adam Staffin (who married Cora Wickham).  John Staffin was born in 1830 to Adam Staffen (1804-1869) and Anna (Mathias or Mathis) Staffen (1807-1886), and was brother to 10 siblings.  Anna’s father was Johann Mathis, who was a blacksmith, and her mother was Anna Maria (Schmitt) Mathis.  Adam and Anna sailed to the United States through Ellis Island from France in 1840, purchasing land in Collins, New York.  They had left their home in Saarlouis, Germany to sail from the Port of LeHarve in France, coming to the US with $800.

Adam and Anna were schoolteachers, teaching in a large room of their home; and Adam was also a stone mason and farmer.  At that time, the Staffen’s school was the only one in the area, and young men traveled from miles around to be educated by them.  They taught reading, writing, and arithmetic, and were paid in kind with raw materials rather than money. When Adam and Anna Staffen came to the United States, they spoke fluent French and High German.  They were Roman Catholic, and are buried in the Langford Catholic Cemetery in Langford, New York.

Adam Staffen was one of three sons (Jacob, Adam, and Nikolas) of Johann Steffen (1748-1814) and Susanna Girlinger (1766-1833).  Susanna’s parents were Phillip Girlinger and Maria (Bauer) Girlinger.  Phillip was a farmer in Germany.  Johann Steffen was the son of Simon Steffen (1716-1771) and Catharina (Schwartz) Steffen.  In 1741, the marriage record of Stefan Simon (who changed his name to Simon Steffen around 1847) reflects that he married Catharina Schwartz, and that her parents were Franz Schwartz and Apollonia (Everhard) Schwartz.  Simon’s parents were Dominicus Simon and Catharina (Corsain) Simon.  Around 1838, Simon and Catherine moved from Longville, France to Ittersdorf, Germany, although rule changed from German to French rule at that time.  It is possible that the move and name change were due to political reasons.

Thought to be Edward C. Ritter, Husband of a Descendant of the Staffin’s

Marion Staffin married, though I do not know what her married name was.  I believe that they had a daughter or granddauther, possibly named, Anna, and she married Ed Ritter.  Ed Ritter, to my knowledge, had several siblings, including Fritz Ritter, Herbert Ritter, Mrs. Hoyt Prince, Mrs. Guy Hickey, Mrs. Clarence Simmons, and possibly another sister and another brother, though I am unsure of their names.  Ed and Anna Ritter did not have any children.  To my knowledge, Ed was a butcher, and I have a tin type of him reflecting that.

This is a tin type that shows my great great grandfather, Clarence Briggs, as a young man, possibly around 1900-1910.  I do not know the identities of the other young men in the image.

This photo shows my 15 additional tin types from my Gale, Briggs, and Henn ancestry that were accidentally discarded by my parents during my family’s move from Collins to Gowanda around 1992. 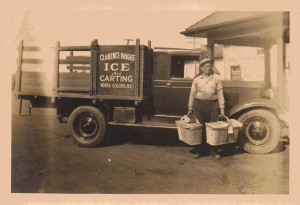 My great great grandfather owned and operated an ice carting business in North Collins, New York.  He transported blocks of ice to people’s homes for their use in refrigeration, such as in their root cellars.

This is a photo of Clarence and Sumner Briggs, and possibly Howard Briggs, from North Collins, New York around 1890.  It is the best photo that I have of them as young boys. 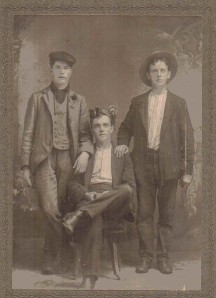 From what I understood from my grandmother, this photo was supposed to be a silly picture of three of these Briggs’ young men.  They went on an outing and had several different photos made on this day, reflecting different backgrounds and venues. 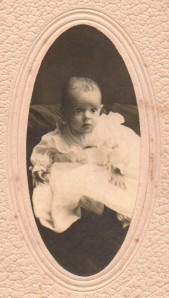 This is a photo of my grandmother, Bernice Gale Briggs Babcock Sprague, as a baby in 1912 in North Collins, New York.

In this photo, my grandmother was about two years old. 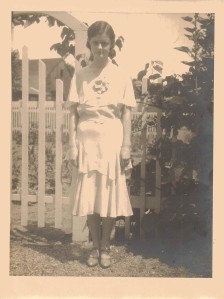 This is a photo of my grandmother either on the day of her engagement or wedding to my grandfather, Charles A. Babcock.

This is the only photo that I have that shows both of my great grandparents, Clarence and Julia (Gale) Briggs, in the same photo.  This was taken in 1946 in Collins, New York at the childhood home of my father, Bruce Babcock.

This is a photo of John Briggs, a brother of my great great grandfather, Clarence Briggs, from North Collins, New York in 1917 before he went off to fight in World War I.  There were several Briggs’ brothers who fought in the War, and they all returned home alive.

This is a photo of identical twins, Marie and Veronica Briggs, from April 1941.  They are daughters of Ivan Briggs and Louise (Gullo) Briggs of North Collins.  David Briggs was the son of Ivan and Louise, and died while serving in the US Army during the Vietnam War. For many years, there was a memorial to David outside the front of the Catholic Church in North Collins, New York. 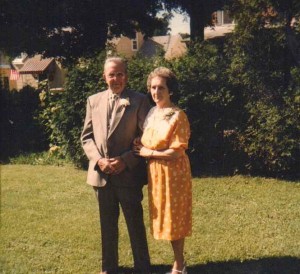 Here is  another photo of the twins.  They were about three-years-old in this picture. Veronica was named after her grandmother, Veronica.

I hope that you have enjoyed viewing these photos.  I will make additional posts with photos that reflect the others of my ancestral families that I identified, shortly.